A long time ago I decided that I needed to snap to it in the kitchen.  Make something more healthful and tasty than the frozen Stouffer’s lasagna blocks I’d been heaving onto the table.

I was newly married and clueless about meal preparation. Though my mother, and her mother before her were amazing southern cooks, I was otherwise engaged when they were handing out the gastronomic genes.  And it was not from a lack of consistent maternal coaxing.  Nope.  Cooking was just not my bag, and it’s still hanging beside my dusty apron. 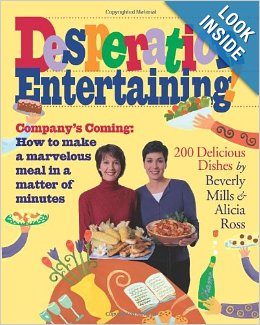 So, enter the Desperation series of cookbooks for the culinarily disinclined.  A friend from my old neighborhood introduced me to Beverly Mills and Alicia Ross (well not literally) – two lovely ladies who take all the guesswork out of meals, and logically arrange the content of their books,  so it makes sense to even witless wonders like me.  Additionally, they use some whole and some processed ingredients to make the entire thing easier.  I’m not sure if they pioneered the Semi-Homemade Cooking concept that Sandra Lee is so talented at delivering into your living room courtesy of the Food Network, but it’s that level of simplicity that  drew me in.

My hope is that neither of these authors shoot or sue me for publishing their recipe here, but I was unable to find a link to it on their site.  I’m confident that the props here for their books will cover any copyright transgressions.

These days I’ve left the lasagna behind and cook a lot cleaner, and with a lot less fuss, BUT that is not to say that you can’t still do better than what I was doing 10 years ago using these easy recipes.  This one happens to be fairly healthy as written, and can of course be cleaned up handily by those of you out there who actually know what to do in a kitchen.

These enchiladas are my Lobster’s favorite so I made them last week for his 50th birthday.  This particular recipe came from Desperation Entertaining! I had forgotten how good this dish actually tastes, and LOVE that it not only uses simple ingredients, but you can prepare it in stages on a busy schedule for a large crowd.

This is super helpful for me because I’m doubly debilitated –  a clueless cook and a hopeless hostess.  In fact, having people over can send me into paralysis if careful planning hasn’t ensued beforehand.   Attempting to cook while entertaining has gotten me close to cocina-en-fuego on more than one occasion.

So give this one a whirl and let us all know what you think!

2.  Meanwhile, as the chicken cooks, rinse, core, seed and coarsely chop the bell pepper, adding them to the skillet as you chop.  When the chicken is no longer pink, add the cans of tomatoes with their juices and stir until well mixed.  Remove from the heat.  The chicken mixture can be refrigerated, covered, at this point for up to 12 hours.

3.  Spray two 13 x 9 inch baking dishes with cooking oil spray.  Using a slotted spoon to drain off as much of the liquid as possible, place about 1/2 cup of the chicken mixture in the center of a tortilla.  Wrap enchilada style, folding in two sides of the tortilla, leaving the enchilada open on both ends.  Place the filled tortilla in one of the prepared baking dishes seam side down.  Repeat until all the tortillas are filled, arranging them in the baking dishes in a single layer. The filled tortillas can be refrigerated, covered at this point for up to 3 hours.

5.  Crush the bouillon cubes, if using, with the back of a spoon (I put in a ziplock and beat with a meat-tenderizing mallot).  Put the half-and-half and bouillon crystals or crushed cubes and 3/4 cup of the cheese in a 2-cup glass measure.  Microwave on high until heated through, about 2 minutes.  Stir until the bouillon dissoves and the mixture is well combined.

6.  Pour the cheese mixture evenly over the enchiladas, making sure each one is moistened.  Bake for 30 minutes, covered with (cooking oil sprayed) aluminum foil.  Then remove the foil and sprinkle on the remaining 1 1/4 cups of cheese.  Bake, uncovered, until the cheese is melted and bubbly, about 10 minutes more.  Serve immediately with sour cream (or yogurt) on the side (wish a nice green salad).

Note: Although enchiladas are traditionally made with corn tortillas, flour tortillas (usually used for burritos) work best for this recipe.