You’d think a fitness fanatic like me would have injected my ever-obsessive past time into all facets of my life by now.  I mean, I live, eat, sleep and breathe fitness and never let a single person out of my path without evangelizing some random tidbit about this lifestyle.  Seems that’s only applied to the 2-leggers in my life so far because I got a HUGE wake-up call regarding one of the quadrupeds in my domestic posse yesterday.

Meet my boy Sampy, a rescue piece of work with whom I spent an entire 6 months coaching to not draw blood upon greeting humans. We’re not sure what he’s made of, but his nipping and corraling and stalking tendencies clearly peg him as a herding dog.  Not a problem, because that’s what I was looking for.  My very first dog as a responsible adult was a herding dog, and a fabulous one at that.  Hence the need for a repeat installment after she passed away in 2009.

At that time I was still in my pre-transformation stage, and the small person had gone off to school full-time.  So I honestly had some serious hours to fill, and what better way than with a psycho miniature hyena masquerading as a puppy ?

“Trey” as he was then known, popped up on my Petfinder herding puppy search as a Corgi mix, apparently the only sibling of the litter with long legs. Well I say Ha! to you rescue people because this boy hasn’t a Corgi bone in his body and grew up to be just a wee bit larger than even a super-sized Corgi.  During his puppyhood he literally sprouted about 2 inches every night. Each morning I’d greet a magnified amalgamation of teeth and limbs at the crate door.

Because of his ‘gregarious’ nature, as the trainer called it, I spent an entire year obsessed with Sampy and getting him up to family-life snuff.  I can’t even begin to count the number of hours logged in our neighborhood walking – well at the beginning walking and stopping –  so he’d give me some leash slack.  I’m sure the passersby were amused by what appeared to be continuous mind-numbing marathon sessions of red-light, green light around the block day after day, week after week.  Add to that the taped up soda cans stuffed with pennies, Poochie Bells, rolls of sausage treats, dog books, trips to obedience classes, dog park, doggy daycare and every other single training service or element known to man (and his best friend), and it about sums up those first 365 days with the boy.

After all was said and done, I have to give myself some credit and let you know that all that hard work and determination eventually paid off.  By the age of 1 Sampy was reasonably well-behaved and able to live comfortably with us, no longer snapping and nipping and had graduated all his classes, up through the advanced level.  I was so proud, but exhausted.  He still needed so much exercise, and I was burned out walking him 1.5 hours every day and/or schlepping him to the muddy, unpredictable dog park umpteen times a week.  Although he loved being with his family, what I’d learned over the year was that what he REALLY liked was playing with other dogs.  During the course of finding exercise outlets I had actively sought out and participated in actual dog playdates.  Yes, it was like a bunch of bad scenes from Best in Show.  I was that consumed.

Enter Cotten.  Cotten was the culmination of my dream to have 2 dogs at one time.  This is a fantasy I had carried with me forever since I grew up having two dogs and knew first-hand how beneficial canine buddies could be.  Before we found Sampy, I had been interested in getting a Cockapoo. However my husband’s misunderstanding about their temperament led us to choose a herder instead.  Well, my desire to own one of these fluffy cocker/poodle combos was exacerbated by my extensive time with foofy pups at the dog shop.  I’d begun researching breeders and had been following a few dogs in Iowa.   They went on a major doggy discount at 13 weeks because they’d passed their puppy prime.  This is a rare occurrence I assure you.  Throw in the fact that Sampy needed a playmate and the small person was wishing for a dog that wouldn’t crush her on a regular basis, and voila, a dynamic duo was born – in theory.

Now the lobster had been very tolerant about Sampy’s adoption.  He’d been ready to take a break from ownership and be dog-free for at least 6 months.  Well, you dog people can understand that Phoebe had been sick for some time, and I realized that after 2 weeks without a dog in the house, I was lonely for a new one not because I didn’t miss her, but because I’d been mourning for her for a long time before her actual departure. With old Samp’s crazy disposition and mondigious size, you can imagine the huevos I had to grow in order to approach him about adding yet another dog to the pack.

My husband is an analytical guy.  Numbers are his thing, and creating presentations jam-packed with them was his actual job.  So in my desperation to obtain approval, I whipped up a Powerpoint deck I knew he could relate to.  When in Rome, right?   My case was that we would save SO much money with this second dog because he would basically cover all the entertainment costs and keep Sampy exercised.  Of course he saw right through it.  If you’re good at math, or even not – you would recognize that two dogs equals double the expense, no matter how you slice it, despite the entertainment offset or wonderful price tag.  He was reluctant, but pretty nice about it though.  I’m about as agile with numbers as a rhinoceros on crutches, so his agreement to this second dog more than showed his love for me.

“Justin” was delivered to the airport from Iowa just a year after we adopted Sampy.  I’d read about the best timing to add new dogs to the pack, and it was generally in the first year or two so they would play well together – perfect timing.  Yes, I was still obsessed.  Cotten, as he quickly came to be known, was the cutest thing on 4 wheels, and has since turned into the almost perfect companion dog for our family (he still poops in the house when it gets too cold outside).  Not only is he tough as a boot and can morph into the Cockapoo Warrior and distribute whatever woopass is needed during play sessions with his still ‘gregarious’ brother, he is cuddly and sweet with the small person, and sleeps with her every single night. In my future I see lots of Cockapoos.  I highly recommend the breed, and will forever have a huge place in my heart for them.

So you may have been waiting for me to get to the point.  I’ll appease you now.  Acquiring Cotten as Sampy’s playmate, mixed with my need to experiment with part-time employment and embark on the initial steps of my fitness journey all led to letting go of my stringent exercise plan for the big boy.  I told myself that all the playing together and Sampy’s new calmer existence due to his adult status, released me from all that me-led activity.  It was so liberating!  So much so that I abandoned all other forms of exercise for him and actually turned that focus on ME and all MY exercising.  Little by little he started to grow.  He hid it well with his feathery coat, and I turned a blind eye and ear (to all those who voiced their concern over his new, expanded girth) for a long time.

It wasn’t until he tipped the scales at 77 lbs this week that I finally had to call it.  I had taken him in because he had been limping every time he played outside.  Apparently his joints were starting to buckle under the extra upholstery he was carrying.  My big boy wasn’t just big.  He was fat. What a slacker I was!  I never in a million years thought I’d have a dog on a diet.  Fit people have fit pets, right?  Well I decided not to beat myself up too badly.  I’m great at being obsessed, but not so great at multi-tasking multiple obsessions.  I was assured, however,  that I won’t have to be obsessed.  It’s just a numbers game, and if I can do it, he can too!

Percentage-wise he does have more to lose, though.  The vet calculated the exact measurements for us, and he needs to lose about 19 pounds. WOW.  That will mean quite the decrease on intake, and the potential for much counter surfing, as he is prone to do when he’s hungry. I decided to try the green bean diet, and it’s been working well so far.  The added fiber keeps him full and makes for some lovely hind-end orchestral maneuvers in the evenings, which we’ve chalked up to cheap entertainment.  Sampy is still not used to all the activity down there and jerks his head surprisingly towards his butt with every flatulent outburst. 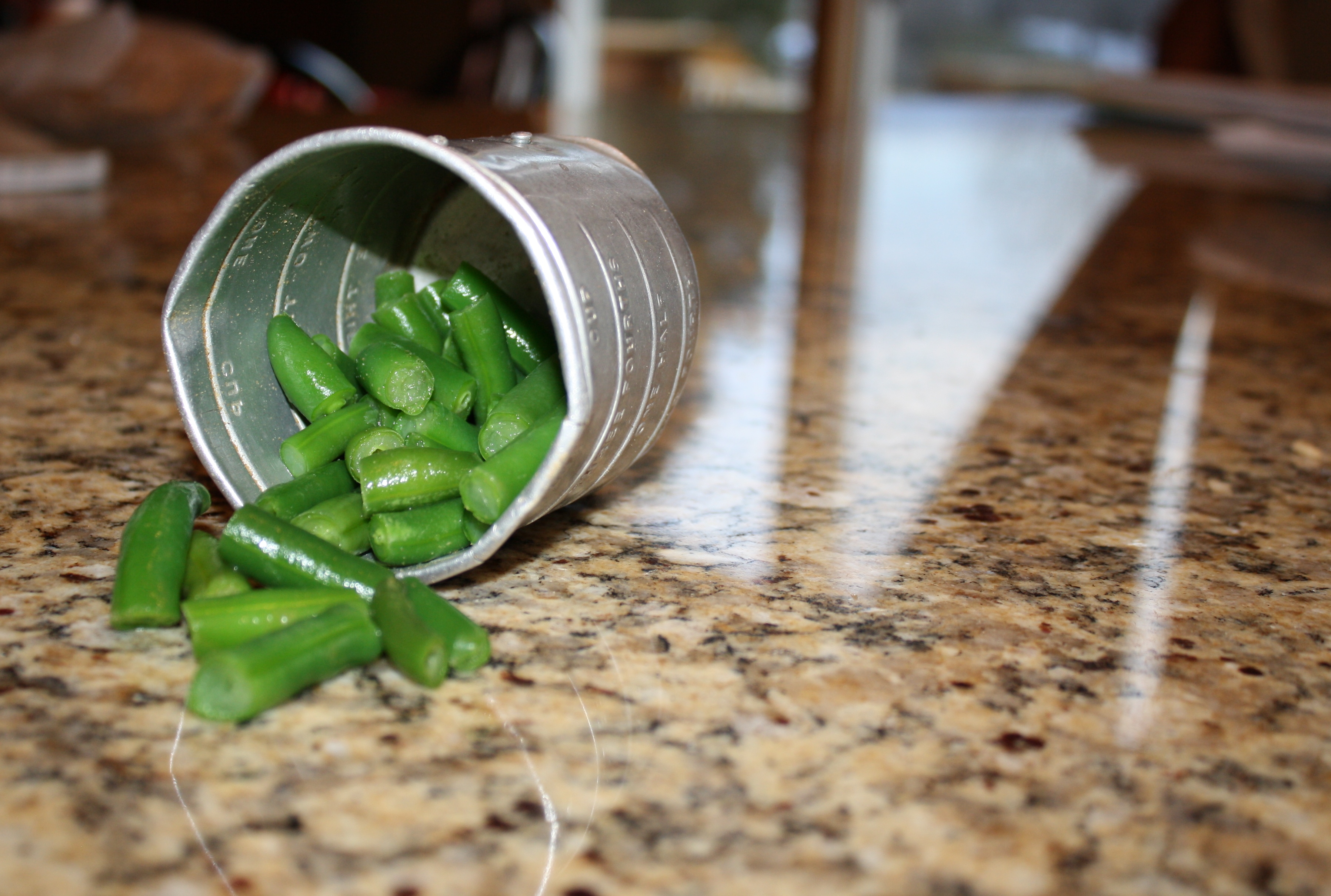 We’ll have approximately 124 days to achieve this new weight goal if we follow the program, so I’ll keep you posted.  I love the fact that we’re taking our time getting there. As you know that is the only way to achieve lasting results.  Cucumbers are on the list next, so we’ll try to keep the tastes interesting, though you probably know by now that’s a tall order for a short cook like me :).