Four years. I’m going on four years of keeping off the fat I lost when I clawed my way out of the Mythical Motherhood Vortex. Some days I have to try REALLY hard to remember what my life looked like before I embarked on my transformation journey. I was eating a LOT of crap back then: fried chicken tenders, countless margaritas and all kinds of other dietary DON’Ts. And in accordance with the You Are What You Eat law, I felt just like a lumpy, battered piece of meat.

I had lifted weights for over 10 years at that point, and that had worked on its own for a long time. But now that I’d had a baby and rounded the corner past 40, I knew that part of the equation was missing. I knew it, I knew it, I knew it. I just didn’t have the courage to admit it. Until that day. And on That Day I made a promise to myself (I am big on promises, you see). So I followed through to the end. Finally.

I DO remember that it was hard getting started, though. Really hard. Just doing what the pages in my workout book told me to do should have been easy enough. I mean, it was literally laid out for me in black and white, and I had read over it so many times that I had parts completely memorized. “80% of fitness is the diet” comes to mind. Again, I knew what to do times 3, but it was the execution that had caught me up for too long.

I was overthinking it. So I just finally stopped thinking about it and started doing it. Simple as that.

My first stab at healthier eating was tackling breakfast. At that time mine consisted of coffee with about 1/2 cup half and half and 5 Mississippi’s worth of honey squeezing (because it was *SO* much healthier than sugar) in it.  There were enough calories in that morning joe to add up to a meal, and it felt like one. I had a hard time choking down a healthy plate of food after those cups back then, because I was overwhelmed with fullness. But I eventually got over it.

That was just step 1 out of about a bazillion I took that year on my path to healthier eating. I really wish I would have recorded every single footprint I planted along the way. But by the same token it’s a good thing I didn’t know just how many steps were going to be required to reach my goals, because I probably traversed the equivalent distance to a trip around the world. Having that knowledge BEFORE starting out would have scared me off for good. Knowing that this MASSIVE life change is out there. Waiting for you. Laughing at you. Daring you to try it. Because it’s just TOO much to accomplish. You’ll just screw up. Yet. Again. You may be feeling the same way. 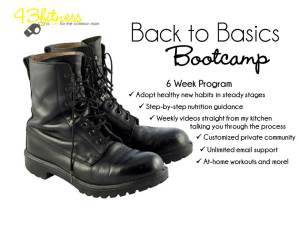 But this time was different because I took it in those little steps. Steps forward. Steps backward. But overall, enough in the right direction to get me where I needed to go. And that’s because I just kept going. I kept on going and it got easier. And in time, I had gone so far in one direction it was difficult to remember exactly where I’d come from in the first place and why I’d be stuck there for so long.

If you’re nodding your head right now thinking that this time will be different for you too, then get a leg up on your goals and join in on my  B3 Bootcamp. It’s a stage-based online program that’s all about how you can surpass your wildest dreams with the most sensible of approaches. You’ll be mentored by a certified Health Coach and Personal Trainer (that’s me!), and immersed in a supportive community with others like you who are working toward the same thing. It’s delivered right to your inbox, and you can do it on your time, right at home.

You DESERVE to feel as amazing in your body as I do. You just have to give it time and consistency. WHY I didn’t figure this out sooner, I’ll never know. But I am a walking testament to fitness with sanity, and I couldn’t be happier.